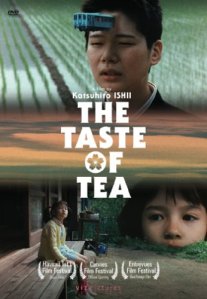 You might be able to tell that I have a special obsession with Japanese film. I find that the surrealism and humour of Japanese film tends to be in a class of its own, and The Taste of Tea (2004) is no exception to this. This charming film follows the movements of the Haruno family during a time when each of the family members is restless with a facet of their ordinary lives.

The youngest of the family, Sachiko, wants to learn how to stop a giant version of herself from following her around. Her father, Nobuo, is an exhausted hypnotherapist. Her mother, Yoshiko, is both a housewife and animator, searching for the perfect battle pose. Her brother, Hajime, is awkward around girls, but is an excellent Go player. Her uncle, Ayano, is a despondent sometimes-sound mixer who has experienced a ghost not unlike Sachiko. Finally, Grandfather Akira is eccentric and pretty senile, but energetic for his age.

Each of the characters has their own ‘issue’ which is explored in the film, each of which are given equal weight, as their issues are often interrelated. The film is incredibly character-driven, without any huge emphasis on overall plot. When watching The Taste of Tea, you get the feeling that you are peering into the strange lives of a family whose story is continually developing.

The film is shot quite beautifully, with very pretty shots of the Japanese countryside. The picturesque serenity of the countryside is the perfect accompaniment to the apparently normal and meandering lives of the Haruno family. However, just like the Harunos, the countryside has hidden secrets.

Although the film could be classed as a drama, there are moments of distinct comedy that lighten up the more bittersweet events. One moment in particular is a strange and wonderful musical interlude where a flamboyant manga artist, and Grandfather Akira, record a catchy song and perform an amazing dance routine. It is moments like these that are evidence of the flexibility of the film: through its focus on character rather than plot, its genre can be realistically interchangeable.

No review can go without mentioning the surprising surreal moments of the film. At the beginning, we are treated to a crazy moment where a countryside train travels directly out of Hajime’s forehead as he ponders a lost love. Later in the film, a giant sunflower expands and expands, threatening to engulf the entire solar system. However, the surreal moments of the film are not presented as twee talking points to give the film some trendy randomness. Each nugget of surrealism has significance for the characters, which makes them special to see; giving an insight into each characters’ thoughts and feelings in the moment.

The Taste of Tea is a very whimsical and charming film, with a bittersweet ending. Although it seems like one of those films that has no defined genre, it is simply a story of one family during a distinct period in their life. As viewers, we get the feeling that this is just one of many stories that the family members will experience during their lives, giving the film an undeniable taste of nostalgia. This is a beautiful film that you cannot miss.

← Marina Abramovic: The Artist Is Present (2012): Quick-shot review!
The Elephant Man (1980): “People are frightened by what they don’t understand.” →