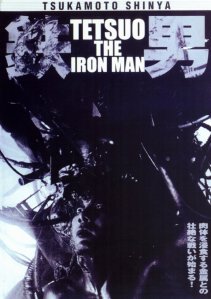 What a film. Tetsuo: The Iron Man (1989, dir. Shinya Tsukamoto) is a Japanese film about… well… I’m not entirely sure. Handing it over to the capable hands of IMDb for the synopsis:

A strange man known only as the “metal fetishist”, who seems to have an insane compulsion to stick scrap metal into his body, is hit and possibly killed by a Japanese “salaryman”, out for a drive with his girlfriend. The salaryman then notices that he is being slowly overtaken by some kind of disease that is turning his body into scrap metal, and that his nemesis is not in fact dead but is somehow masterminding and guiding his rage and frustration-fueled transformation. (source)

You might be able to tell from the above synopsis that this is one strange film. Tetsuo: The Iron Man is one of those cult films that you hear people talking about occasionally as groundbreaking, necessary viewing, but then you watch it and wonder what kind of drugs everyone was taking.

Tetsuo: The Iron Man is kind of reminiscent of David Lynch’s Eraserhead (1981) in that it’s all in black and white, doesn’t have a lot of dialogue, is extremely artistic and occasionally sexually deviant, and is completely, utterly weird. I could actually only make sense of the plot after reading the above synopsis. Whilst watching this film, I was caught up in its weirdness and wasn’t able to fully grasp the story. The whole thing is like an assault on your sensibilities because things constantly happen that are gross, funny, and disturbing all at once. That’s not necessarily a bad thing, but it depends on whether it resonates with you as a viewer. For me, it didn’t really. This film is ultra surreal but it’s not the kind of surreal I generally enjoy. If you’re a fan of Cronenberg’s brand of body horror, you might be a big fan of this though.

Visually, however, this film is absolutely fantastic. It makes good use of its black and white film, and at times I was glad for its lack of colour as some of the more grotesque violent moments would be outright disgusting if we saw it in full colour (see: its famous sex scene, or don’t see it, because it is 100% gross). As with pretty much all Japanese films I’ve seen, the cinematography is quite great, particularly its use of shadows and light. Some of its action sequences occur through the use of stop-motion, which I found really interesting and exciting to watch.

Even though I thought Tetsuo: The Iron Man was ridiculously weird and somewhat disgusting, I’m glad I’ve watched it. I think that perhaps this is a film that must be seen just to be seen (if that makes sense), rather than to definitively enjoy a quality cinematic experience. If you’re a Lynch and/or Cronenberg fan, you may enjoy it. It’s also almost reminiscent of the semi-body horror anime film Akira (1988), so if you enjoy that type of craziness, then this bodes well. There’s no doubting that this film has some sort of message to tell its viewers, but you’ll have to really want to dig through the weirdness and downright gross moments to get to it.