I wrote this review for Alex Raphael‘s amazing Foreign Favourites blogathon. I’m a big fan of foreign film, and French New Wave, but for some reason I had never seen Vivre Sa Vie (1962) before. This was the perfect opportunity to finally watch it! Many thanks again go to the lovely Alex Raphael for organising this blogathon. There have been some really interesting picks so far, and I’ve added lots of films to my ever-growing list of things to watch, so you should definitely go and check it out! Without further ado, here is my review of Jean-Luc Godard’s Vivre Sa Vie. 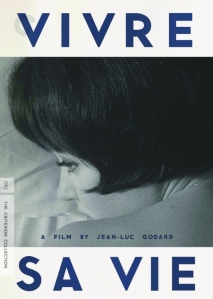 Starring the unforgettable Anna Karina, Jean-Luc Godard’s Vivre Sa Vie (1962) is a film firmly set within the context of French New Wave cinema. Nana (Karina) is a beautiful young woman who leaves her husband and son, hoping to become an actress. Finding herself unsuccessful, she works in a record shop in Paris, but desperately needs some cash. Nana chooses to become a prostitute on the streets in order to make money fast. This film, structured into twelve acts, follows the minutiae of her life as she negotiates her newfound profession.

Anna Karina absolutely shines in this film. From the very beginning, where we see the profiles of her face as the credits roll, she is captivating. As the viewer, it’s difficult to take your eyes away from her since her performance is so hypnotic and nuanced. The camera also never strays away from her for too long, and she is on camera for the majority of the film. One particular scene where she is incredibly impressive is the famous moment when Nana chooses to see The Passion of Joan of Arc (1928) in the cinema. Watching Karina’s silent emotion and fragility on clear display is so moving. As St Joan is soundlessly sentenced to death at the stake, we’re forced to make the connection between her and Nana and their separate plights as women – particularly by the film’s conclusion.

Vivre Sa Vie, translated as “To Live Her Life”, is structured into twelve acts or tableaus, which are numbered and described via title cards. The descriptions are fairly vague, and can note both events and characters. Structuring a film in this manner can be read a couple of ways. It could be done in order to present Nana’s life like a chapter book; to ensure that viewers are primed for the information they’re about to learn. On the other hand, it could be perceived in a more cold, clinical manner – like a shopping list of experiences to cross off as they occur. For me, the title cards seemed to organise Nana’s descent into the world of prostitution in such a way that it seemed scientific, like a categorisation of the flora and fauna found in an environment. Which isn’t a bad thing, as after reading some of the title cards I was excited to see the events that were mentioned.

Apart from the famous cinema scene, there were a number of other moments that I very much enjoyed. There is one scene in a café, where Nana is speaking with a potential pimp – the camera pans from one angle of their faces, to another, showing Nana’s face from many angles in order to show the exact effect of their conversation on her. The camera pans to and fro as they speak with each other, and sometimes obscures both of their faces entirely. Godard is known for his camera tricks, and using a style such as this in the context of a ‘business arrangement’ was very interesting. Additionally, after this scene, there is a gun fight in the street outside the café. As we hear gunshots, the camera pans across the café in quick cuts to the sound of the shots. This is so innovative and put a very unique spin on the situation at hand. My description does it no justice at all – the film’s direction is flawless, and understandably so, since Godard is a genius.

Vivre Sa Vie must also be praised for its brutal honesty. Films of the French New Wave are known for their frank gaze on human life and existential issues, and this is no exception. This film confronts the issue of prostitution and views it from a human perspective. There is no glamorous portrayal of the industry here, nor is there a clichéd downfall of a pretty young girl into substance addiction and self-destructive behaviour. Nana just needs to make some money, and ends up not entirely hating her new profession. The film is, as mentioned, brutally honest about prostitution, and there is one whole act where the post-war French prostitution laws are examined in exhaustive detail. As Nana adjusts her own perception of her situation, we learn all about the rules and regulations of working in Paris. Scenes such as this confront the issues head on rather than skirting around the more controversial aspects.

I chose to watch Godard’s Vivre Sa Vie for this amazing foreign films blogathon because I hadn’t seen it before, and this was the perfect opportunity to discover something new. Anna Karina’s raw humanity, Godard’s amazing direction and style, and an insightful and bold script, make Vivre Sa Vie a film that will be sticking in my mind for a long time. If you haven’t seen this one before, I would highly recommend giving it a watch.

← The Secret Village (2013): Officially worse than ergot poisoning.
Thoughts on… The Beautician and the Beast (1997) →