The theme for September’s Genre Grandeur over at MovieRob was space – a theme that has the potential to be fun, exciting and adventurous, but also isolating, poignant and filled to the brim with existential themes. I chose to watch Solaris (1972), a Tarkovsky classic. Check out the rest of the films for September’s Genre Grandeur here! Without futher ado, here’s my review of Solaris. 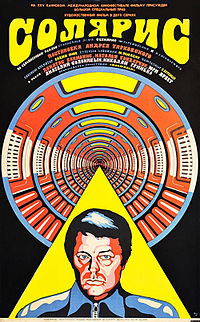 This spacey sci fi classic is a bit of a mindbender. Directed by Andrei Tarkovsky, Solaris (1972) follows Kris Kelvin (Donatas Banionis), a psychologist who is sent to an isolated space station that monitors the mysterious ocean of the planet Solaris. His job is to discover and analyse why the remaining workers aboard the station are experiencing strange hallucinations and psychological breakdowns. Little does he know that the hallucinations are not limited to the people aboard the station, and he is not immune to their influence.

When I was first thinking of which space adventure film to choose for this month’s Genre Grandeur, my thoughts immediately went to this classic. Solaris is quite the cult film and is cited as one of the best science fiction films of all time, in many top ten lists. After watching it, I can see why this is so, as this is one of the more unique and psychologically-minded sci fi films I’ve seen lately.

One of the most unique things about it is that, for a sci fi film set in space, we don’t see a lot of space itself. The audience has an awareness that the space station is hovering above another planet, but we hardly ever see outside of it, which lends a very claustrophobic quality – making the audience feel just as tense as the workers aboard the station. Solaris is pretty much an expert film in terms of making its audience feel trapped and uncomfortable aboard a space station, because its sound design really makes you feel like you’re there. A low hum of machinery can be heard at all times, with atmospheric churning noises that build in conjunction with the story’s tension.

In terms of the story though, Solaris is quite the slow burner, so if you’re looking for a lot of action and explosions and high-octane space drama, then this might not be for you. Solaris is an introspective and psychological film, and the pace of the story matches that. However, even though the pacing may be slow in the beginning, the story development is methodical with a pretty amazing ending that has a lot of payoff. The mystery of what exactly is happening for the workers on the space station for them to experience their strange hallucinations and exhibit their erratic behaviour, coupled with the stunning direction and cinematography, ensured for me that this film was exciting from beginning to end. The best thing about Solaris is its handling of this mystery. There’s a lot of showing instead of telling, allowing the audience to interpret events like a scientist, and respecting the audience’s intelligence in doing so. There are periods of silence and contemplation that any lesser director would have cut given the gargantuan runtime of this film, but these moments actually enhance the tension of the film instead of slowing it down further.

Solaris is essentially about what happens when humans are stuck together in captivity, attempting to uncover the mysteries of the universe and to make contact with other lifeforms, and the impact on their humanity and consciousness that occurs as a result. It can be quite a bit to wrap your head around and there are some lofty scientific concepts that can be confusing. But to me this is part of the adventure. Like Kris, who hopes to find out what exactly is going on, so too does the audience attempt to make sense of the craziness and creepiness that is happening in the film. Each character has their own way of looking at the world, and a different set of ethics or morals that affect their perception of the events on the space station, and different takes on how to handle the difficulties that they face. There are so many ways in which the film could be interpreted according to each characters’ moral compass or philosophical perspective, and in that way, the rewatch value is pretty high as well.

Solaris is very well known for its cinematography, which is absolutely beautiful and haunting; which seems to be Tarkovsky’s standard fare. This film looks quite modern for being a film from the 70s. I would compare its aesthetic to that of Stanley Kubrick’s 2001: A Space Odyssey (1968). It seems to have that kind of spacey aesthetic that hasn’t really dated, despite being imagined roughly 40 years ago. Vadim Yusov is the film’s cinematographer, and his handling of the environment of the space station is masterful. The direction by Tarkovsky is nothing short of amazing, with steady establishing shots and fluid following of the characters that, coupled with the sound design, reinforces that feeling of being trapped within an isolated space station far away from Earth. The aesthetics of this film are strange and so memorable, with random sequences of the film being shot in monochrome film of black and white or tinted colours such as blue or purple. The reason for this is never really explained, but it is certainly very intriguing.

If you’re after a space drama with substance, Solaris might be what you’re looking for. When making this film, Tarkovsky wanted to create a sci fi narrative with emotional and intellectual depth, and this is precisely what is on display here. The desperation of being one of a few people stuck in a floating tin can above a treacherous and unknown planet is so well illustrated; in terms the story, its characters, the dialogue, the many and varied themes, and the absolutely beautiful direction and cinematography. The only real downside that viewers may face with this film is its slower pace compared with other sci fi dramas. There are no explosions and fast-paced action sequences here, but if you’re willing to set aside the time and psychological energy to have your brain thoroughly bended, you can’t go wrong with Solaris.