This newest review for A Timely Blogathon comes from Nathan AKA Bubbawheat of Flights, Tights, and Movie Nights. Nathan’s most excellent blog is focused on superhero films and films based on comic books (or graphic novels, if you prefer). So it seems only fitting that Nathan would choose to review a film based on a graphic novel for A Timely Blogathon! Here’s Nathan’s review of When The Wind Blows (1986). Enjoy! 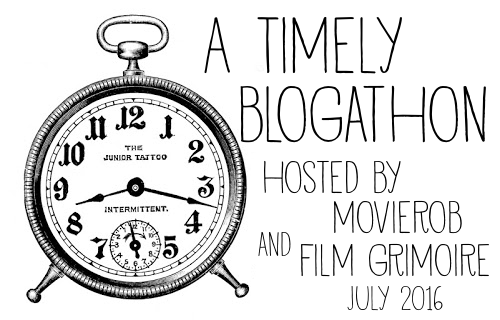 First off, I’d like to thank Anna and Rob for letting me be a part of this blogathon. I’m Bubbawheat and this post is doing double duty for me as it is kicking off yet another animation month over at my own site Flights, Tights, and Movie Nights where I review superhero and comic book films of all shapes and sizes. It’s also a part of A Timely Blogathon that’s being run by Film Grimoire and MovieRob all about films that are 90 minutes or less and I’m sharing it here before posting it over on my site. This film is ten minutes shy of the 90 minute limit for the blogathon which isn’t surprising since most animated films run shorter than live action due to the amount of work involved in each minute of animation versus each minute of live action. The film itself follows an elderly couple in the English countryside who had lived through the second World War and are now faced with the fallout of the first attack kicking off a third.

Stylistically, the film feels and acts more like a stage play than what you might expect from an animated film. Almost the entirety of the run time takes place in the elderly couple’s house aside from an early moment at the store and a handful of fantasy sequences. It also only follows those two characters, with no other voices other than an announcement on the radio. The husband Jim is someone who has bought into the propaganda of his country wholeheartedly and also seemingly suffers from a bit of memory loss, though it’s usually played off for humor more than anything else. And his wife Hilda is a stereotypical housewife who is generally more concerned about the appearance of her home and propriety than anything else. 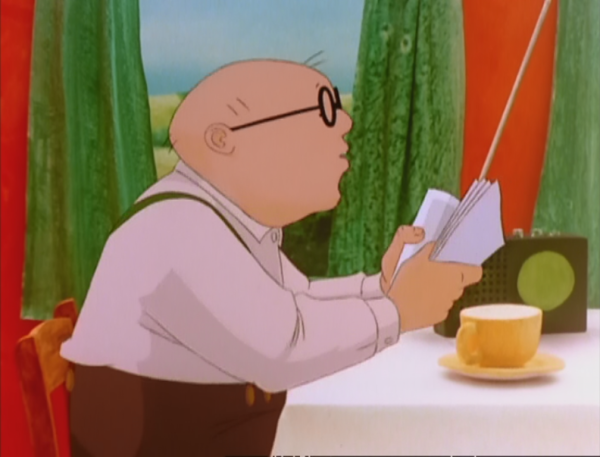 Most of the film treats these two characters as comical, as Jim has gotten a couple pamphlets that are government issued “What to do in case of the apocalypse” essentially, filled with survival suggestions that are more or less as effective as the fifty’s advice of “Duck and cover”. But through it all, he’s utterly confident in his government and their ability to survive and even flourish after the bomb eventually hits at around the midpoint of the film. Even as their bodies slowly succumb to the effects of radiation poisoning, Jim’s confidence never wavers. It’s tough to tell if this is supposed to be due to his underlying naivety and romanticization of the previous war efforts or if he’s putting on a brave face to try and shield his wife from her fears, or even a side effect from the radiation and their eventual malnutrition that causes his lack of mental clarity.

The animation style is rather unique as it combines mainly traditional, hand drawn animation with various other styles throughout the movie. Jim and Hilda are both drawn relatively simply, but their house and some elements of their background are often replaced with models or miniatures or possibly photographic textures which is occasionally jarring, but doesn’t detract from the viewing experience too much. There are also several moments of fantasy sequences as the characters discuss potential situations like what might happen if an enemy Russian came barging through the door, or when they reminisce about their childhood during World War II. There are also a couple fantasy sequences that seem to come out of nowhere and are much more symbolic than literal with images like Hilda turning into a naked fairy for some reason.

One of the moments where they reminisce about the war with archive footage.

What does work better is how the film handles their slow deterioration after the bomb has gone off. Even though it’s punctuated by Jim’s constant reassurances about how everything wrong is “natural” and to be expected after something like a bomb. Whether it’s the fact that their entire garden has shriveled to nothing, yet Jim is constantly hopeful that the sun will break through the clouds and the rain will make things green again. It’s difficult to determine exactly how much time passes as there are many moments where it fades to black as if there’s a time jump, but it’s unclear exactly how much time has passed. They initially say that they should be prepared for two weeks, but due to everyone else having the same idea, their supplies were greatly limited and they soon run out of food and water before crawling inside of giant paper bags as directed by the government approved pamphlet, laying down in their makeshift shelter made up of doors leaned against the wall, and praying a disjointed prayer. It’s even accentuated by the fact that Jim must not be a very religious man, that or his mind was clouded by their condition at that point, but he doesn’t even know who he should be praying to at that point, and when he finally does pray, he strings together random bits and pieces of well known prayers as the camera focuses on the outside of the shelter while the lights darken around them before seeing the small circle of the door move into a cloud backdrop. It’s a little cliched, but still a fitting symbolism of their deaths.

From the original comic, most of the dialogue is directly lifted from the pages.

There is a lot that works well in this film, the oppressiveness of the literal cloud around them is palpable after the bomb has hit, and their gradual decline in health is mirrored in the animation as their designs become more gaunt and sickly. In a way, it reminds me quite a bit of the Ghibli film Grave of the Fireflies. The biggest difference between the two is that this film tries its hardest to keep things light for as long as it can. The elderly couple feel like they’re just a pair of silly, absentminded old folks who are very quaint and set in their ways. But those same qualities that seem funny during the first half of the film take on a very different tone as things around them become bleaker, making the couple’s obliviousness seem much more sad than funny as they die a very lonely death. The politics are also quite interesting as the couple have subtle moments of racism and xenophobia when they discuss the “Russkies” and the Japanese bombing. It would have been nice to see them at least attempt to go outside of their home to seek out signs of life, though we do get a brief glimpse of a destroyed town with a slightly horrific description of burnt flesh that Jim optimistically writes off as dinner roasts. It’s still a fascinating what if scenario handled in a very unexpected way. Until next time, this has been Bubbawheat for Flights, Tights, and Movie Nights.